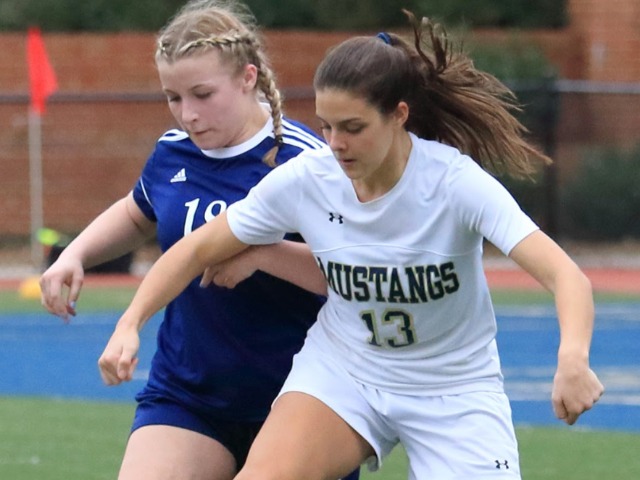 The Mustangs jumped out to a 2-0 lead within the first 15 minutes of the match.

With just over 10 minutes into the match, Brooke Benn touched in Mount Vernon's first goal on cross from Grace Keller for a 1-0 lead.

Three minutes later, Emery Hoffman scored on a break-away and from 20 yards out for a 2-0 Mustang advantage.

The Mustangs added five goals in the second half and allowed just one to seal the victory.

Ellie Kurlander notched her first goal of the season six minutes into the second period from 20 yards away for a 3-0 lead.

A minute later Audrey O'Toole scored from 10 yards away for a 4-0 advantage.

Keller scored her first of two goals at the 26:55 mark followed by another goal on a corner kick that was deflected into the back of the net with 24:13 to play.

Mount Vernon's final goal came from Ella Ruth Campbell on a corner kick from Hannah Hagenau for a 7-0 commanding lead with 12:05 remaining in the match.

The Cavaliers' lone goal came on a penalty kick with 6:31 remaining from Peyton Bunting, who was fouled in the box.

The Mustangs outshot the Cavaliers 29-5 en route to the victory.

Christine Turnbull picked up the win in the net for Mount Vernon, grabbing two saves.

The Mustangs return to the pitch on Thursday, Feb. 7, traveling to Our Lady of Mercy.