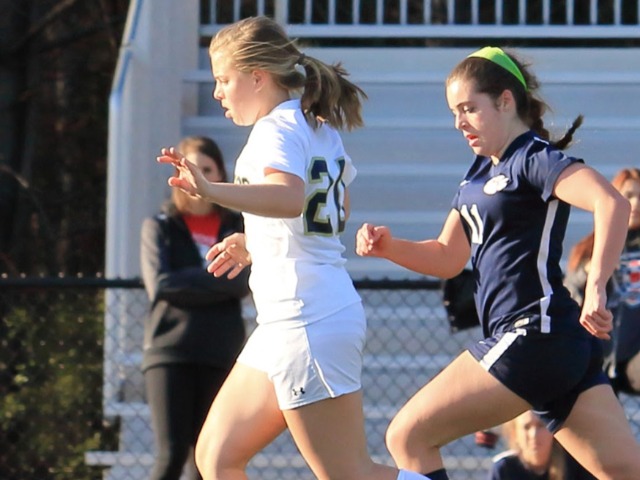 Mount Vernon jumped out to a 2-0 lead at the end of the first period of play.

With 20 minutes to play in the half, Gracie Hudgins found Audrey O'Toole for the Mustangs' first score of the afternoon and a 1-0 lead.

Sixteen minutes later, O'Toole struck again for her second of three goals on an assist from Gracie Hudgins for a 2-0 Mount Vernon advantage.

In the second half, the Mustang scoring barrage began, scoring a whopping eight goals.

Four minutes into the second period Madeline Hudgins capitalized on an unassisted goal for a 3-0 Mustang lead.

Five minutes later, O'Toole scored to complete the hat trick to give the Mustangs a commanding 4-0 lead.

With 30 minutes remaining in the match, O'Toole assisted Ella Ruth Campbell for a Mustang score and a 5-0 lead.

A minute later, Hannah Hagenau sent a corner kick into the box and found Madeline Hudgins for a score and a 6-0 edge.

O'Toole assisted Brooke Benn with 26 minutes to play followed by a Madeline Hudgins assist to Ellie Kurlander for an 8-0 edge.

The final two goals came in the last 20 minutes of the match to bring the mercy rule into effect.

Grace Keller connected with Kurlander for a 9-0 lead followed by an Emery Hoffman and Madeline Hudgins asssist to Gracie Hudgins for a 10-0 score.

With the victory, the Mustangs have now outscored opponents 40-2 over the first six matches of the season.

The Mustangs return to the pitch on Thursday, Feb. 21, traveling to Mt. Pisgah.

Kickoff is scheduled for 5 p.m. in Kennesaw, Ga.