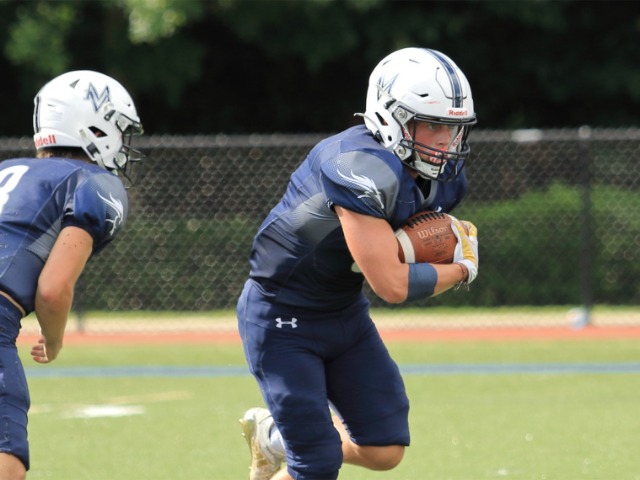 ATLANTA - The Mount Vernon varsity football team picked up its first victory of the 2021 campaign on Friday, Sept. 3, knocking off the Mt. Paran Eagles 35-14 at the Upper Campus Stadium Field.

The Mustangs struck early and often, totaling 28 points in the first half.

The Mustang defense was also called upon in a big way, allowing no points in the first half.

Mount Vernon started the scoring on the second play from scrimmage when Luke Barnes connected with Jonathan Gallinaro for a 24-yard touchdown. With Will Lavender's extra point, the Mustangs led 7-0 just 32 seconds into the first quarter.

The Mustangs made it 14-0 when Barnes found Gallinaro again with 7:19 to play in the second quarter on an 85-yard score.

After recovering the onside kick on the ensuing kickoff, Mount Vernon scored again when Barnes threw a 30-yard touchdown pass to Parker Logue.

Lavender's point was good and the Mustangs led 21-0 with 6:47 to play in the first half.

The last score of the half for Mount Vernon came at the 2:19 mark when Spencer Corley rushed in a 13-yard touchdown. Lavender was good again on the point after to put the Mustangs ahead 28-0 at halftime.

In the second half, the Mustang defense allowed just two scores.

The last touchdown for Mount Vernon came with just over two minutes to play in the third quarter when Barnes found Logue for a three-yard touchdown.

Barnes finished 13-for-24 with a whopping 327 yards passing and four touchdowns.

Gallinaro led the Mustang in receiving with 244 yard on seven catches.

Mount Vernon has a bye week after the Labor Day holiday.

The Mustangs return to grid iron on Friday, Sept. 17, traveling to Athens Christian.

Kickoff against Eagles is scheduled for 7:30 p.m. in Athens, Ga.